We have some hope regarding our council wanting to take our carbon neutral status away.

For those that do not know we are extremely proud of being the only carbon neutral decal manufacturer in the world. We are, without getting too big headed, the very example of how businesses need to be as our climate gradually warms up. We are not greedy (we don’t want to continually grow, we just don’t want to shrink) and we minimize our impact on the environment by generating and running on renewable energy. We source the bulk of our raw materials and products we use ensuring they are made in the UK; buying only the best quality so we know it will last as long as possible and not get wasted.

But our local council, Torridge District Council (TDC), want to take our carbon neutrality away from us by thinking it is perfectly acceptable to build tall houses in front of our solar panels that will cut the power off over the winter months.

We have posted a previous blog about this and we want to give you an update as, right now, we do have some hope that TDC may start to change their attitude towards our business and the example we set for others.

It is practically mid winter here, the sun is as weak as it gets, but as I type this we have our machines cutting our UK manufactured vinyl with our super efficient infrared heater panels over head and our business computers and server are running. All of that power is being covered by our solar panels despite it being midwinter. In fact we have, right now, surplus, electricity being feed out into the electrical supply that will be used by our neighbours rather than drawing additional gas/nuclear powered electricity. We and our neighbours are powered by our midwinter sunshine because of our solar array. To cap it all...IT’S FREE ELECTRICITY! Not costing us a penny! That means we are environmentally better but, from a business point of view, very competitive and secure financially, and that makes great business sense.

As the sun is weak at this time of year we at Hippy Motors need as much light as we can to ensure we are covering our needs and our neighbours are benefiting from the power we don’t use ourselves. Put some buildings in front of the solar array and all that goes. We start drawing the gas/nuclear powered electricity from the mains instead which is bad for the environment and, from a business point of view, costs us money.

This is why, a few years ago, we spent £11,000 building our very own electrical generating plant so we would not need to get mains gas/nuclear powered electricity. That is great and will have paid for itself in 10 years time, it is better for the environment and makes great business sense.

As an example of midwinter power generation (that will be taken away if the houses are built) here is today's power chart (14/01/22). The green shows the total power generated, the extra we give to our neighbours, the blue our own consumption and the red is what we draw from the mains (that’s us putting the kettle on for a cuppa). It stops at 2:30 because we finished work then (it’s a Friday!), after that our business becomes our home once more. 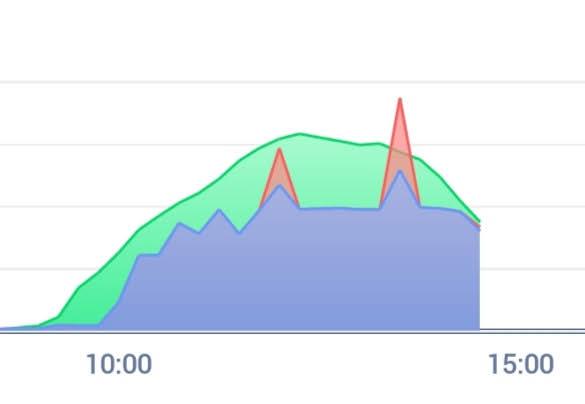 So lets get to our glimmer of hope; get positive, what’s the good news? Well it’s come from an unexpected quarter (for us); but then again what we expected from the beginning was people in authority to protect us not to discard us. So, it seems, I may have had it wrong all the time.

I have listened, cynically, to Boris Johnson and other senior Conservative MP’s over the last couple of years talk about the ‘greening up’ of the UK economy, investing in renewable technology, encouraging businesses to be carbon neutral and the whole of the UK being carbon ‘net-zero’. I’ve been a Green Party voter for most of my adult life and I never thought I’d hear it from the Conservative Party and I suppose I never believed it when I did. I would sit there and say “But they are allowing my renewable power to get switched off!”.

So I had an idea, let’s put the Conservatives to the test.

I first wrote to Councillor Andrew Saywell of Devon County Council who are, as far as I can tell, above TDC in the pecking order. I summarized my situation to him and asked if he could remind TDC that what they are doing is going against UK national policy and they need to encourage carbon neutral business and as a consequence not take that away from existing ones like Hippy Motors.

I expected nothing positive back but I didn’t, I got an agreement from him. He then went and talked to the Chief Executive of TDC about Hippy Motors, our problem and how TDC really need to support carbon neutral businesses not take them away in line with UK policy. He could not offer any guarantees as it’s not in his control but I got assurances that they TDC will be doing what they can.

That was good and very welcome but because I’ve been stung too many times by TDC planning department who have only acted against me and been, at times, purposefully deceitful, I took it further.

I contacted Sir Geoffrey Cox MP for Devon here in the UK. Now those reading this who follow British politics may recognise the name as he the richest MP in a very rich cohort in a wealthy UK Parliament and, I’ll be honest, my prejudice made me think he really would not want to be bothered with my problem.

But I am really pleased to say I was wrong. Sir Geoffrey did express an interest in supporting Hippy Motors and knew this is wrong of TDC to not enforce current UK policy so he did contact the Chief planning Officer at TDC to ask to be personally updated on progress and decisions made. That is all he could do as I already had the support of Andrew Saywell on the matter.

It has been explained to me that, as it stands, technically, no one at the council can force the developer to change the current, harmful, plans to Hippy Motors. TDC can though, in my mind, ‘encourage’ the developer to do so and I hope as a result of my elected representatives in local and national government expressing an interest that TDC really need to support carbon neutral business that they will do just that. A solution is not difficult, all it’ll take is for the developer to put single storey garages in front of the array rather than a couple of two storey houses; just to think seriously about the problem, come up with a solution and still make some money out of this and keep Hippy Motors being the fine example of a carbon neutral business. If TDC don’t ask for change from the developer and approve plans that take away our renewable power over the winter months they will be seen as hypocrites and stuck in a fossil fuelled past as the River Torridge laps ever closer to their riverbank offices and all their own plans to be carbon neutral will be seen as just blah, blah blah.

Wanna help us? Well you can. You do have a voice; you can ask TDC yourself to ‘encourage’ the developer to amend their plans to take into account our carbon neutral business. It’ll be great for TDC to know others nationally care and are watching them closely. Just write to...

You can do this online with TDC but you need to register your details. That can be done by following this link and look for reference 1/1086/2021/REM

Thanks for reading this far and caring.